Saturday and Sunday afternoons from 13:00 till 17:00 It is advised to phone ahead to confirm opening as changes can accure at late notice. Special opening hours can be arranged by appointment.

How did it all start?

It all started with a real Dinky Toys that I got when I was seven years old. It was an old Austin Taxi and an aunt gave me an Austin A 40 Devon.With these two Austins my brothers and I played and immitated an Austin garage. My next additions were an Austin A 40 Somerset and an Austin A 90. From that moment on I could not be stopped from buying more miniatures. A large part of my pocketmoney went towards expanding my "Austin garage". Of course later I also bought Morrises and MG's. In the late 60's, when most English car companies merged, I also started collecting anything from Minis to Jaguars. These first models in my collection are also displayed in the museum. In the meantime my collection has grown to over 7000 pieces ranging from many brands. The models were bought in different European countries, but also in South-Korea, Hong-Kong and Japan, countries I visited on business trips. If a certain model interested me I bought it. I am sure that, when you visit my museum, also you shall enjoy the collection that I have build up over the years.

Where is the museum situated?

Asperen is part of Lingewaal counsil and is situated in Vijfheerenlanden. The small city has a history of over 1000 years and is located along side the Linge river. The museum exists in the front part of an old farm house from 1640. The room on the right hand side of the front door is the room previously used as living room and now used to exhibit the miniatures. On the left hand side of the front door is the museum shop where you can enjoy a cup of coffee while you view the miniatures offered for sale.

As mentioned earlier, it all started with English cars. Therefore it is not surprising that at least half of the collection represents English cars, in which the Austin Seven takes one of the special places of course. The Austin Seven, later the Mini, became the most copied car after the Second World War. Besides the English cars, the museum also has a large variety of other brands, such as the Peugeot, Citroën and Renault from France, the Alfa Romeo, Ferrari and Fiat from Italy and from Germany the Porsche, Volkswagen and Mercedes, just to mention a few. More than 6500 models of all shapes and sizes can be admired. Besides Dinky- and Corgi-toys models there are also less popular brands such as Mebetoys, Rio, CB Car, Schuco, Kingstar, Gama, Politoys and Spot-on. Also current miniature brands likes Polistil, Burago, Solido, Matchbox, Norev, Vitesse, Maisto, Edocar etc. Our aim is to offer you the most varied collection, in all different scales of car and miniature brands. All this in picturesque Asperen along the Linge, near Leerdam, in the centre of the Netherlands. 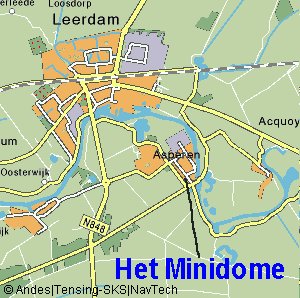